Woke up yet again with the mosquito net wrapped round me. Am not sure what I am doing wrong. It doesn't seem to make much difference if I sleep under it or not as I'm still getting bitten.

Had a lazy start to the day with a cup of tea and book. About 10am I decided to leave and made my way to a local chemist to buy some loratadine (anti-histamine) as I couldn't find mine. 20 tablets cost 120rs - about £1 and I took one straight away. The difference has been incredible so even if I am getting bitten now the itching has stopped.

Went to get a taxi and looked for my friendly taxi driver Raj from earlier in the week. Initially he was nowhere to be seen but as I managed to bargain a 400rs fare (down from 700rs) he arrived and offered to take me to Pashupatinath for 500rs. I pointed out his friend had offered 400rs and after a little good natured bargaining and ribbing from his friends he agreed and we set off.

Now, driving in Nepal is rather an experience and the best way to get through it is to imagine that you are on a fun fair ride. Nominally they drive on the left as in the UK; in practice they drive anywhere there is a gap. Overtaking blind is common, the roads are in a dreadful state of repair and the taxis themselves would have been condemned long ago in the West. I try and think to myself that they drive here every day, they know and understand the roads and the "rules" and if they damage their cars then they will have no livelihood so they are not likely to take overly ambitious risks. It's a leap of faith but necessary to get around. There are few seat belts and the one that was fitted to the driver's side in this particular cab was not attached to an inertia reel but knotted through the bracket at the top!

After a hair raising ride we arrived at Pashupatinath. I paid (with a tip) and then walked down the lane to the ghats.The walk took about 10 minutes and was lovely through woodland and with a wide variety of handicraft stalls to look at. 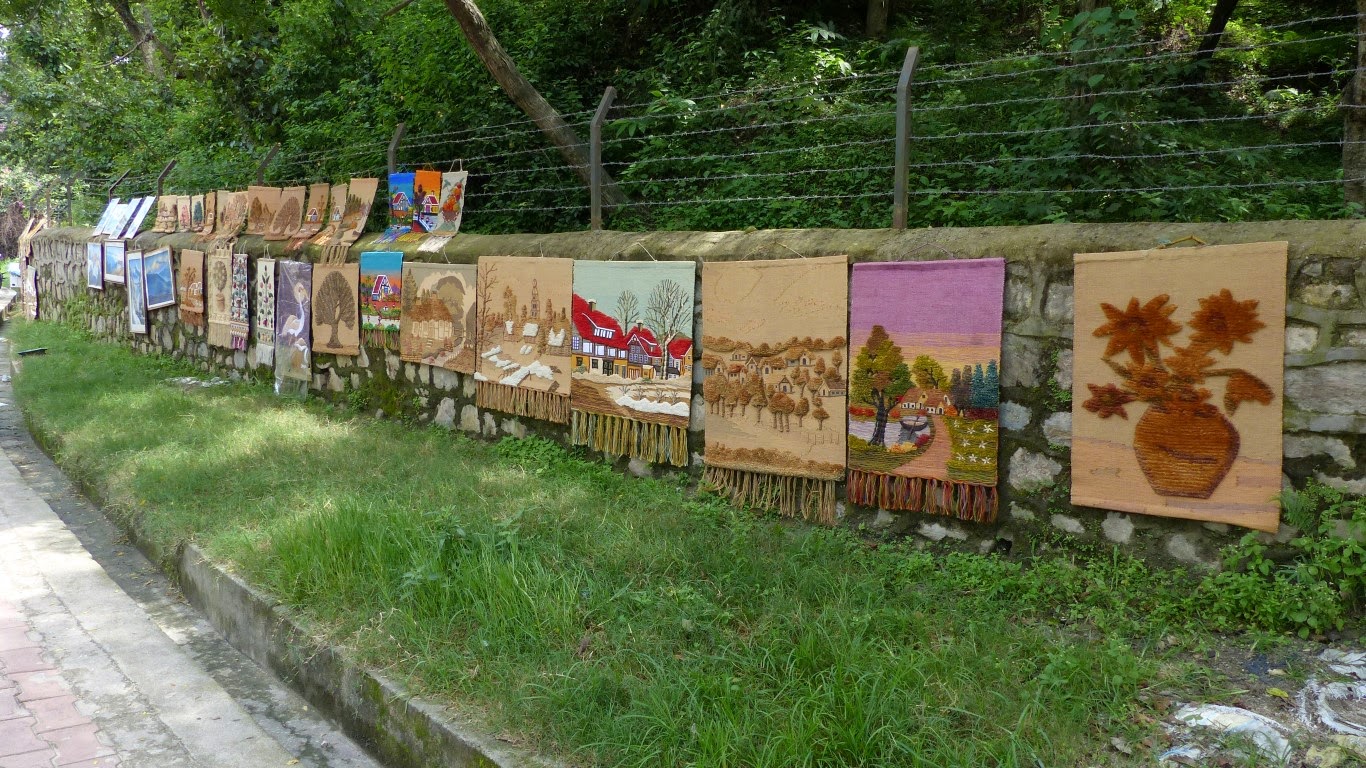 Pashupatinath is the Holy cremation site for Hindus. It gives great merit to be cremated here and all Hindus are supposed to make a pilgrimage to the temple once in their lifetime. There were several fires burning across the river and i sat down to think and observe. People were taking photographs but i did not feel it was appropriate to do so. A young man came and sat down beside me and started telling me about the ghats. He then asked if I needed a guide and I said no. He went away and I then decided that actually a guide would be a good idea so went to find him. It turned out to be a good decision.

We walked around the site, peering in temples and watching the rituals. There are two cremation areas, one for the rich and one for the poor. On the rich side there is a slope down to the water and as we watched a body was brought to the slope and placed there. The relatives then washed the face and feet of the dead person in water from the Bagmati River (holy, it joins the Ganges in India) and also anointed the body with a mixture of rice, water, milk and flour which had been offered in the temple above and which makes its way to the river through a channel. Then they took the body to the ghats and processed round 3 times - there are 300,000 Gods in the Hindu Pantheon so this was once round for each 100,000 of them. the body was then put onto the pyre and the eldest son lit the fire. After this the firemen took over and tended the fire. The relatives have to stay until it is all consumed - about 3-4 hours for a man and 4-5 hours for a woman as "they have more fat" - then the ashes are pushed into the river.

It was a serene and beautiful place, full of atmosphere and interest and it felt holy. We crossed the river and went to the Social Care centre behind the Ghats which Mother Teresa worked at. It's the only elderly home run by the government in Nepal and the residents are clothed, fed and looked after there.On the site there are also hermitages for both Hindu and Buddhist Sadhus to meditate in and a "corneal extraction centre". This, rather gruesomely, is for taking out the corneas of the dead person for use in helping restore the sight of a relative.It's the only body part which can be donated in Nepal and only to a relative. The eye hospital is nearby so the transplant can take place swiftly.

I paid my guide (1000rs-about £8) then set off up hundreds of steps to the top of the site. This led through woodland, a deer park and there were many monkeys playing. At the top there is another temple but I continued on and down the other side before crossing the river and walking up through the suburbs of Kathmandu to Boudha. 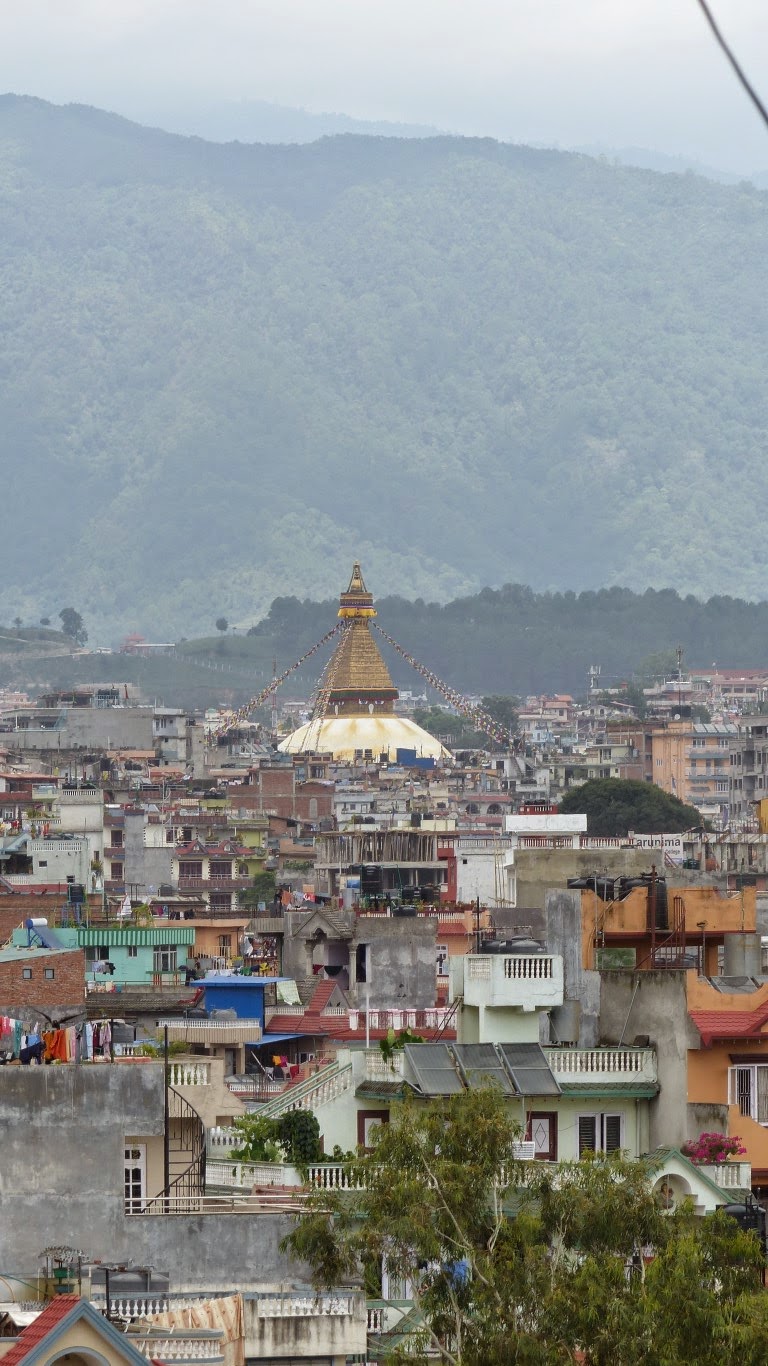 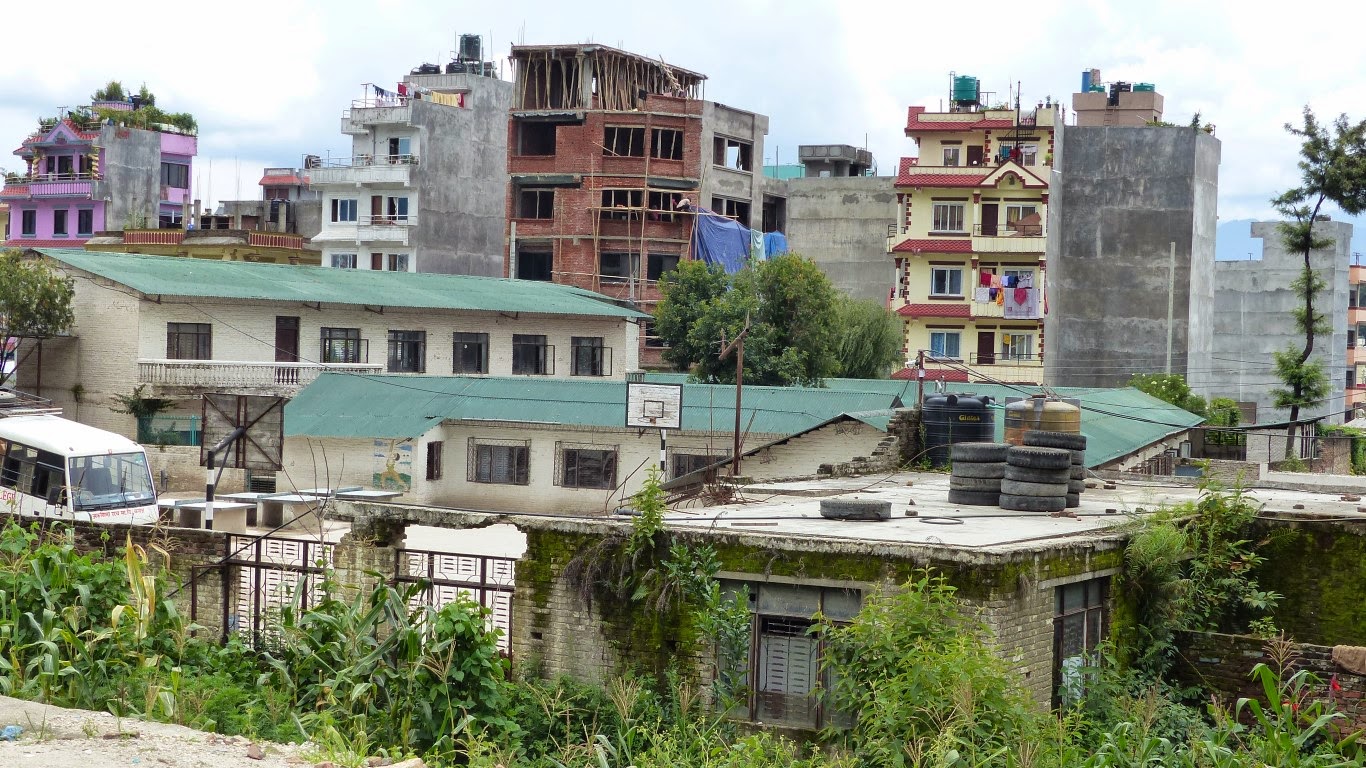 It was a very interesting walk through "normal" people's lives past houses, shops and green spaces. It took about 30 minutes at a gentle pace and eventually I crossed a busy road and arrived at Boudhanath.

Boudhanath is the Buddhist area and is dominated by a huge stupa. The stupa is a representation of the universe (I forget the details) and you have to walk round it clockwise while spinning the prayer wheels. Apparently spinning the prayer wheel once at Boudhnath is the same as saying the prayer written on it 11,000 times. I wandered round slowly and then headed off down a side road to find the Garden restaurant as it was well past lunchtime. I spent a happy 2 hours there eating momos and drinking water, lemon soda and a banana lassi while reading. It cost the princely sum of 480rs - about £3.50! 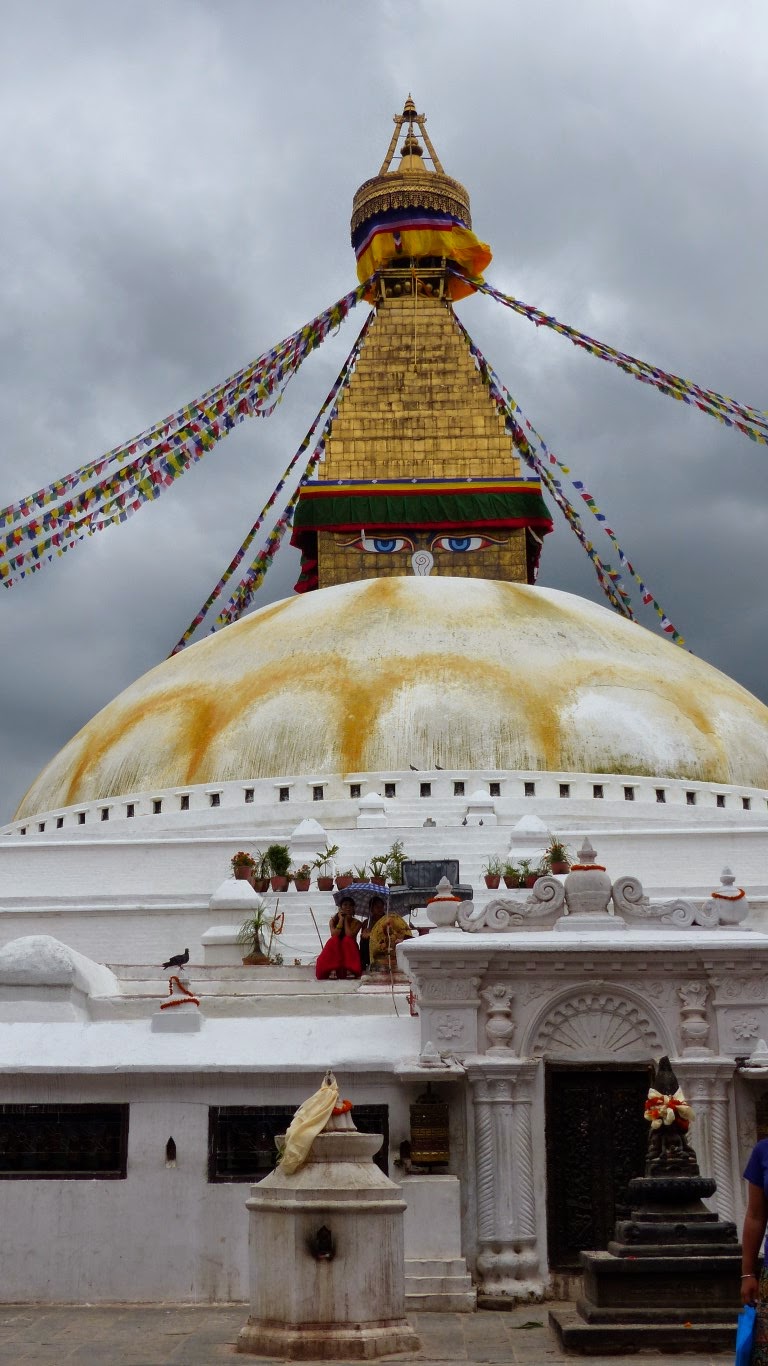 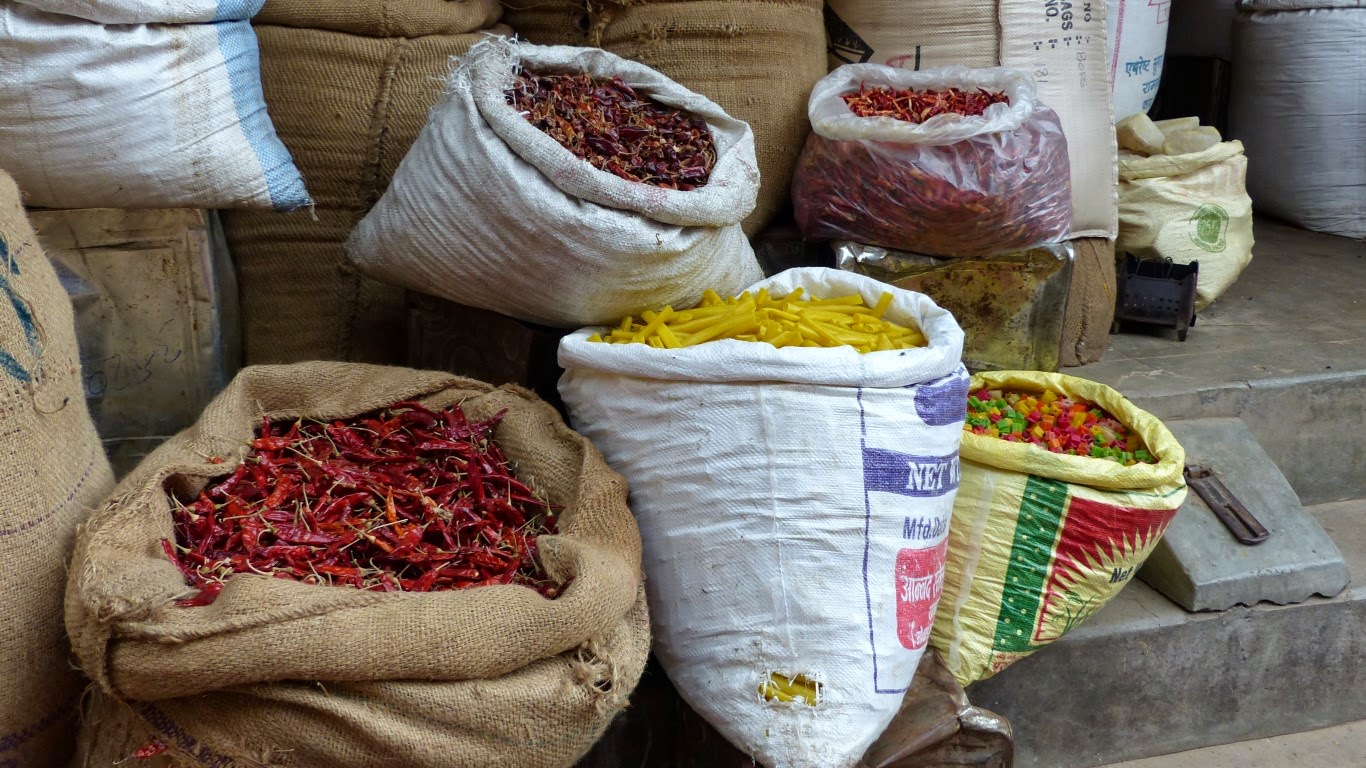 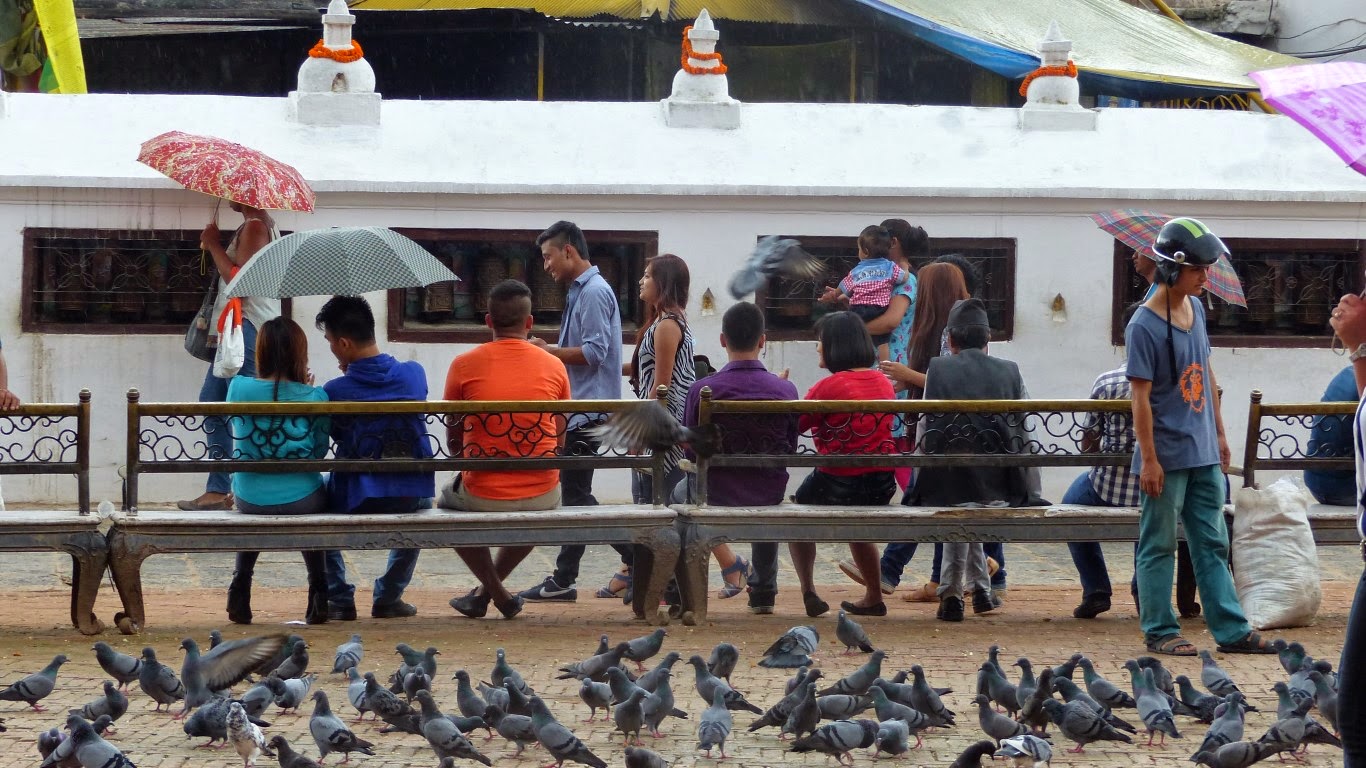 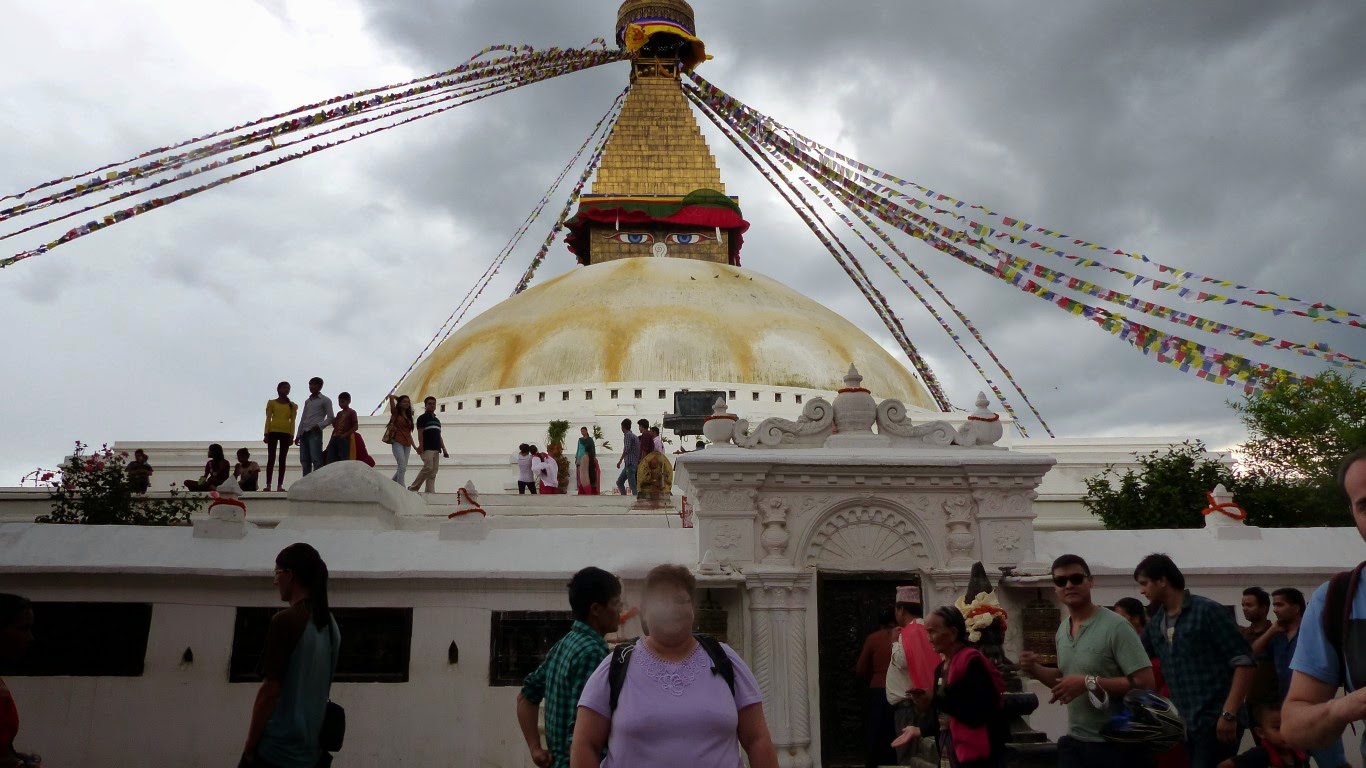 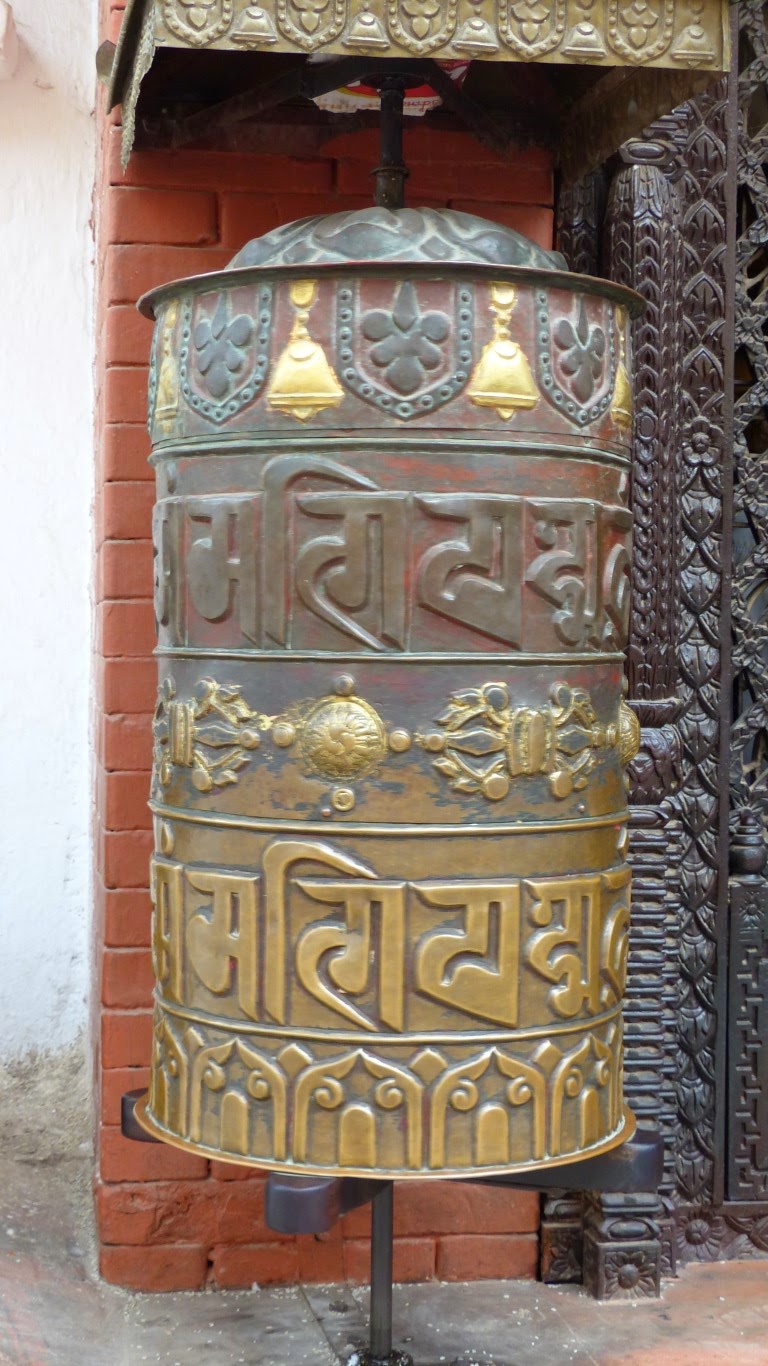 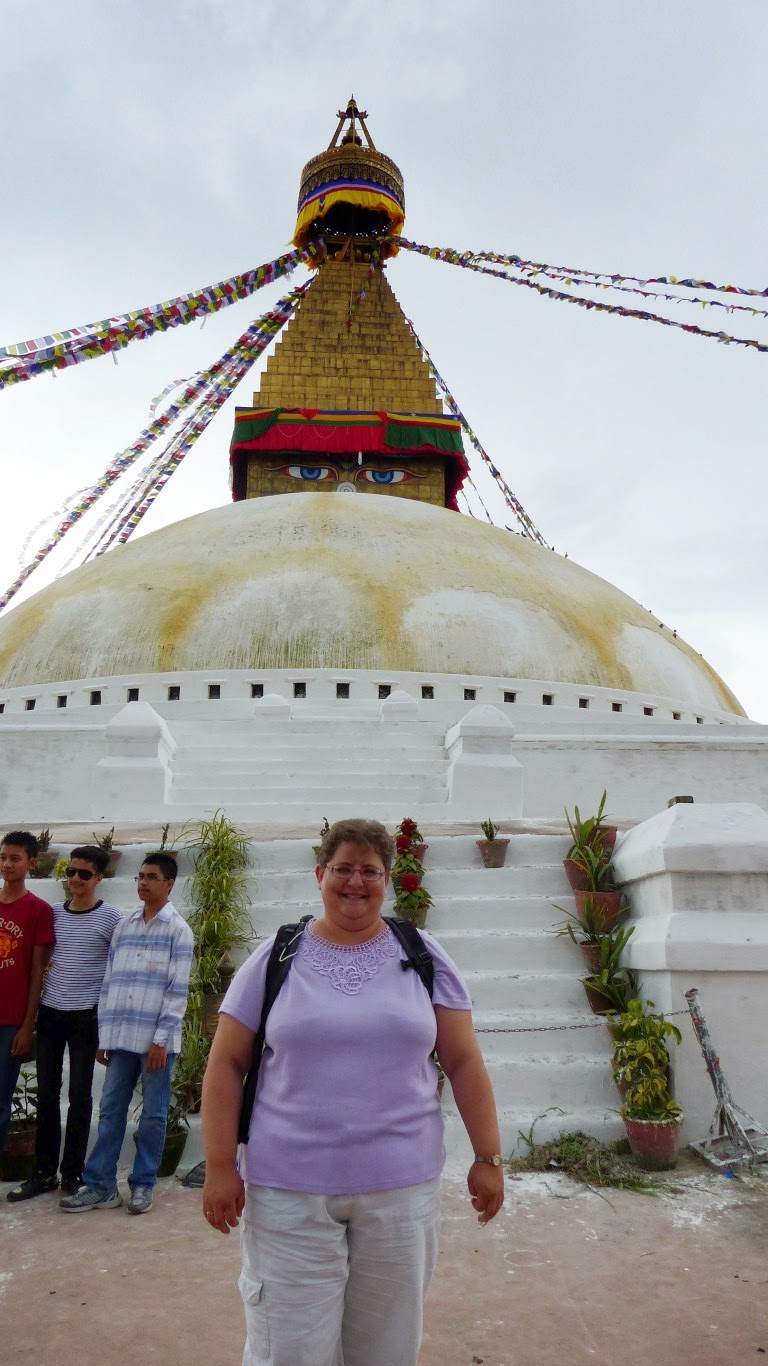 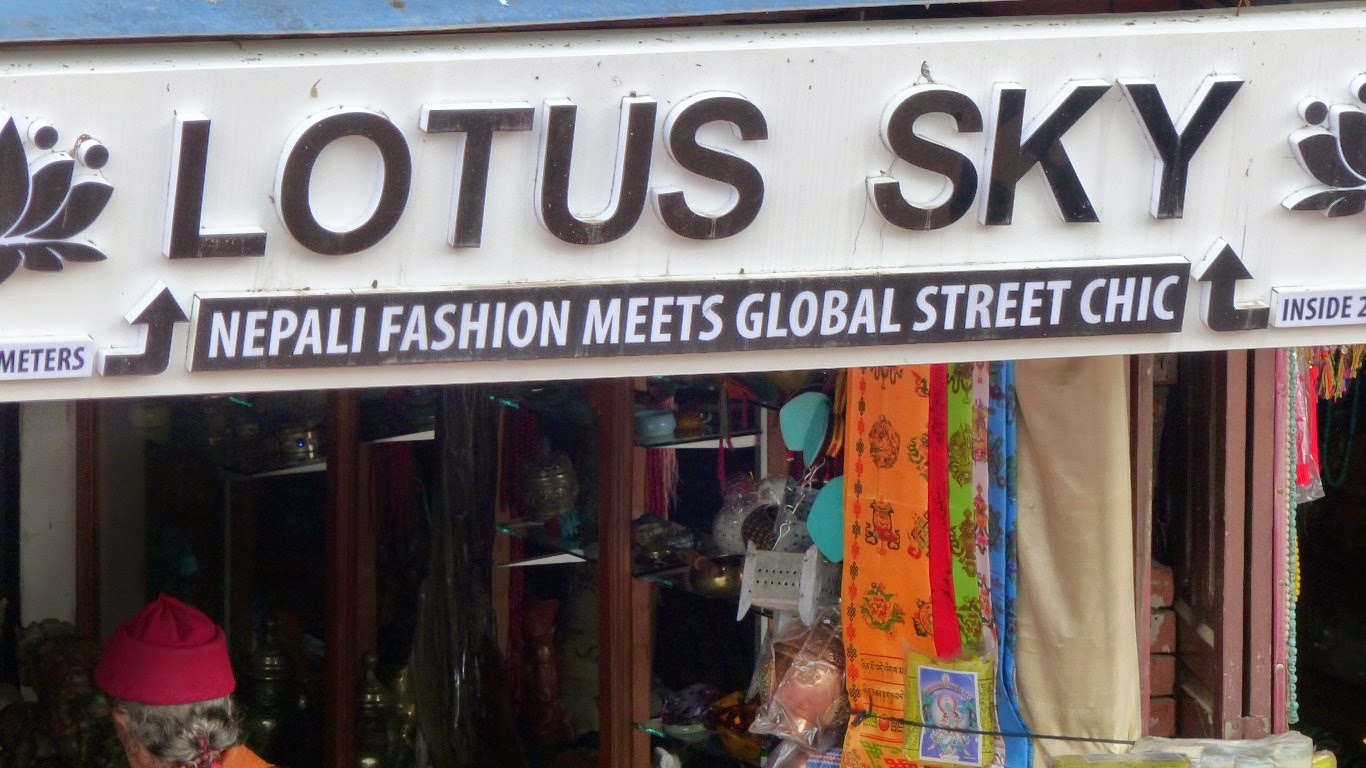 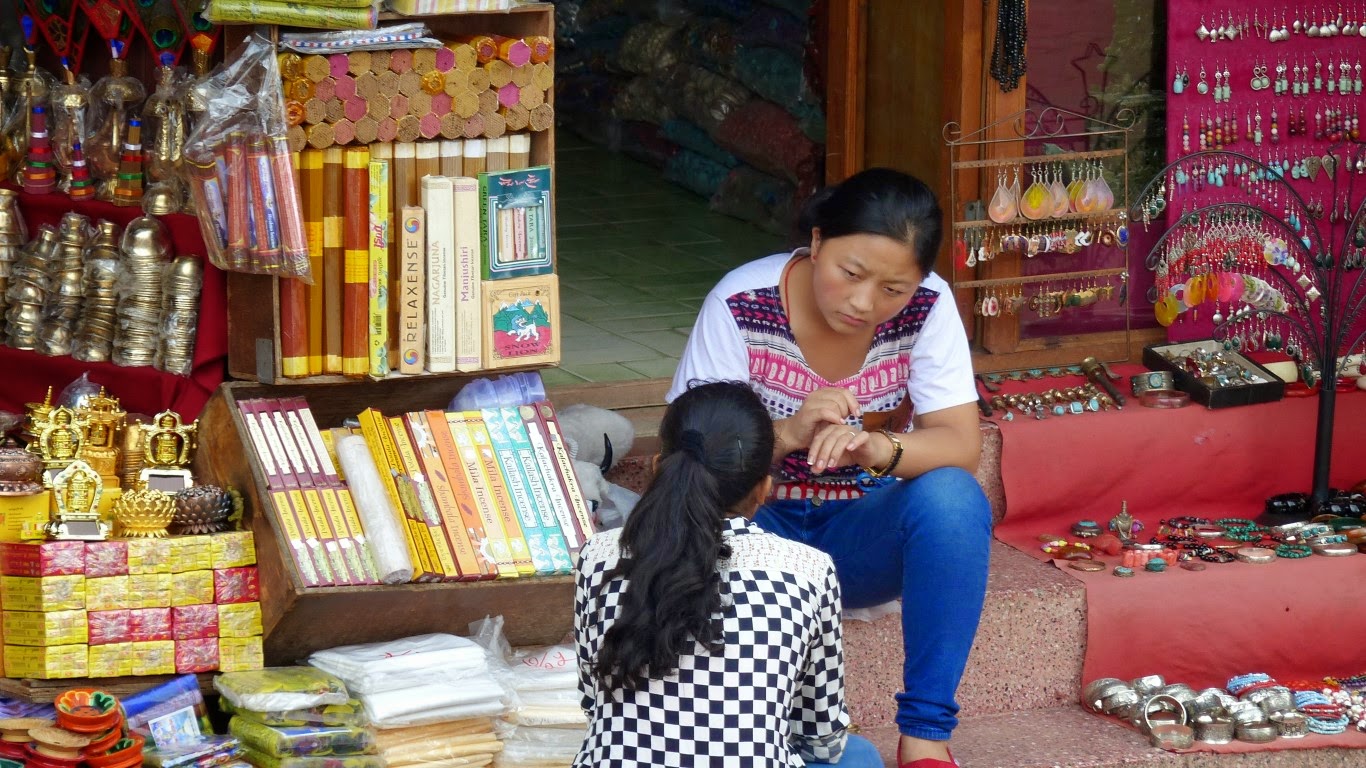 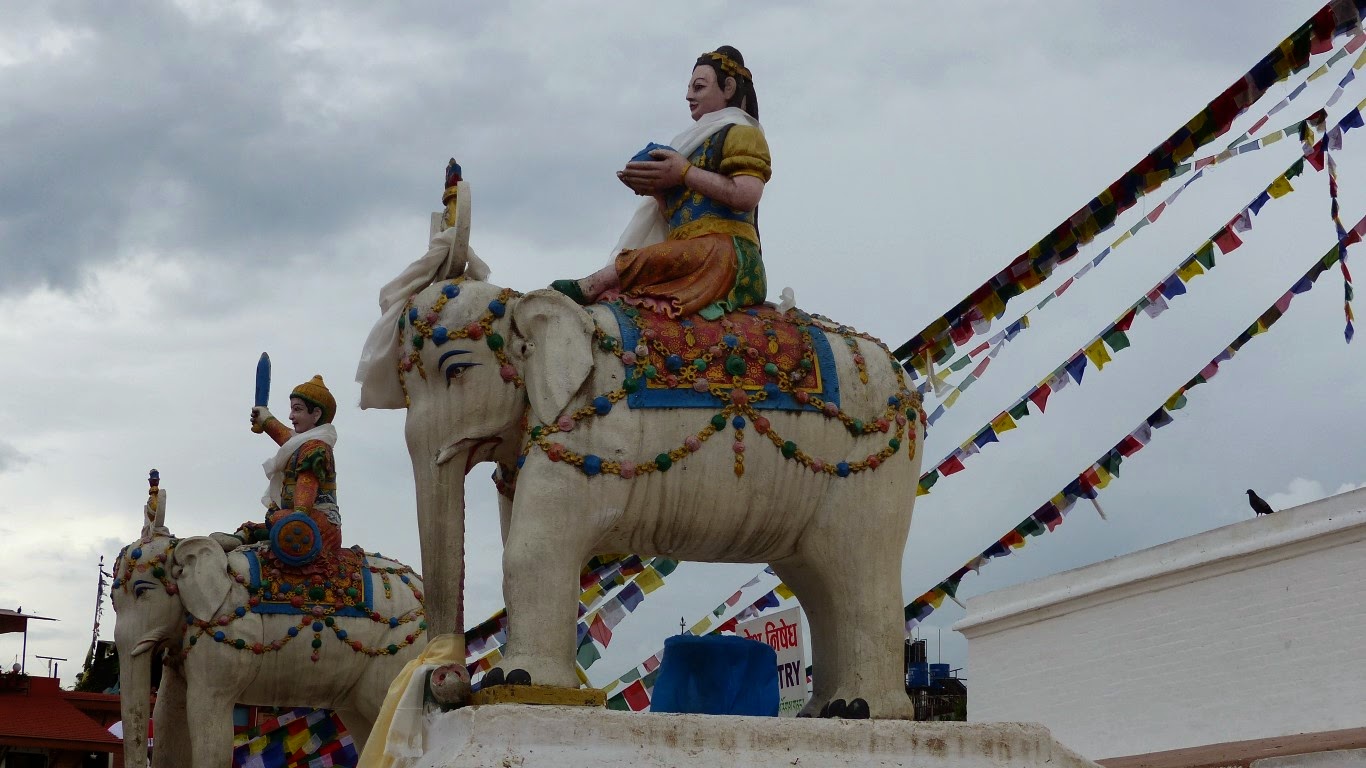 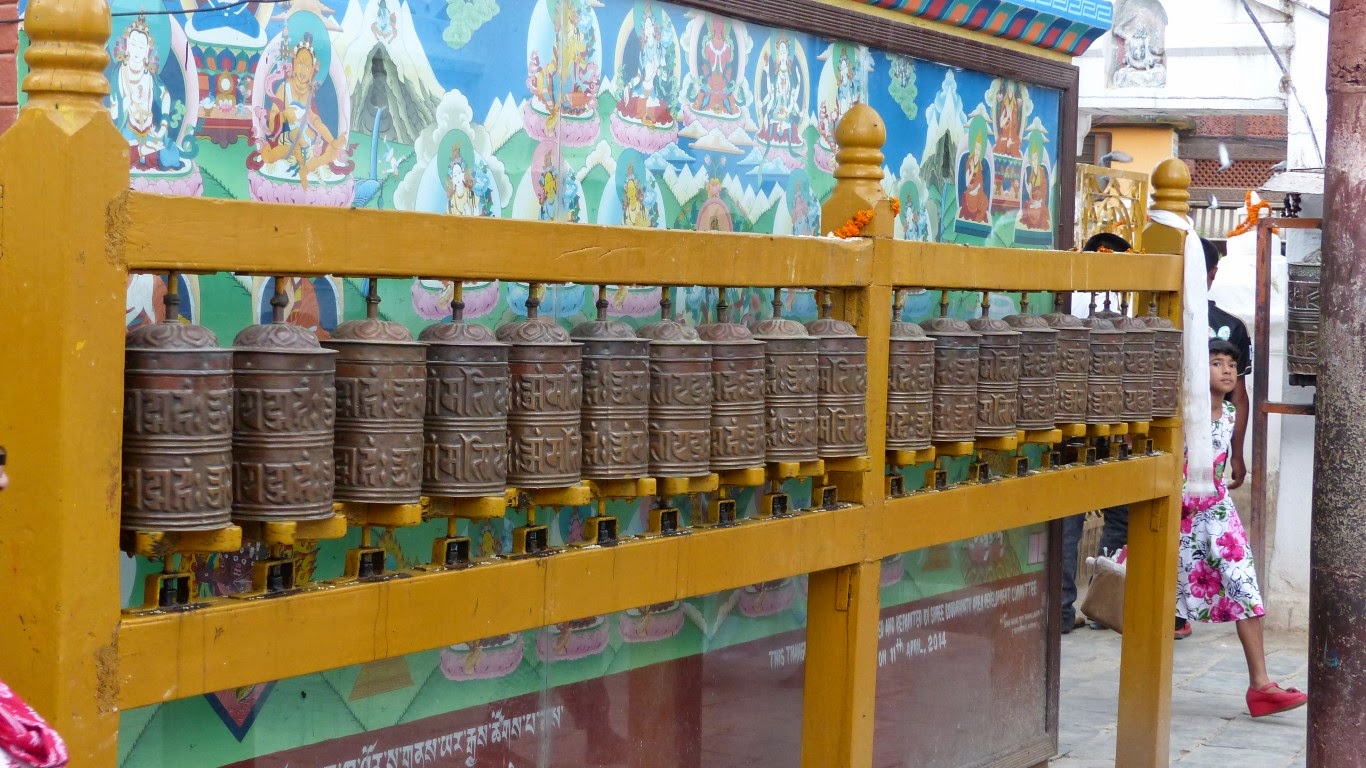 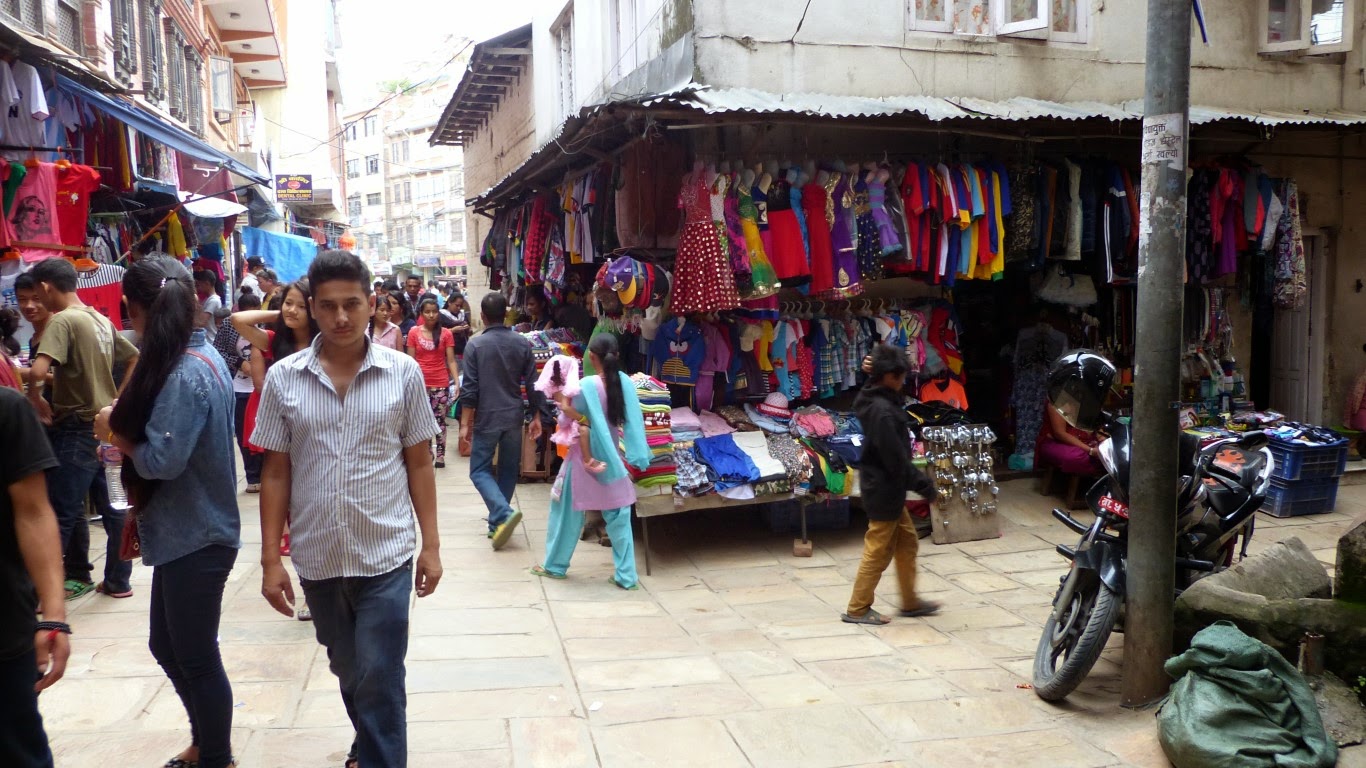 I browsed round the local shops then back to Boudhnath to walk round a couple of times and to go up onto the stupa itself. I managed to find and buy a small mani stone (prayer stone) but resisted everything else. 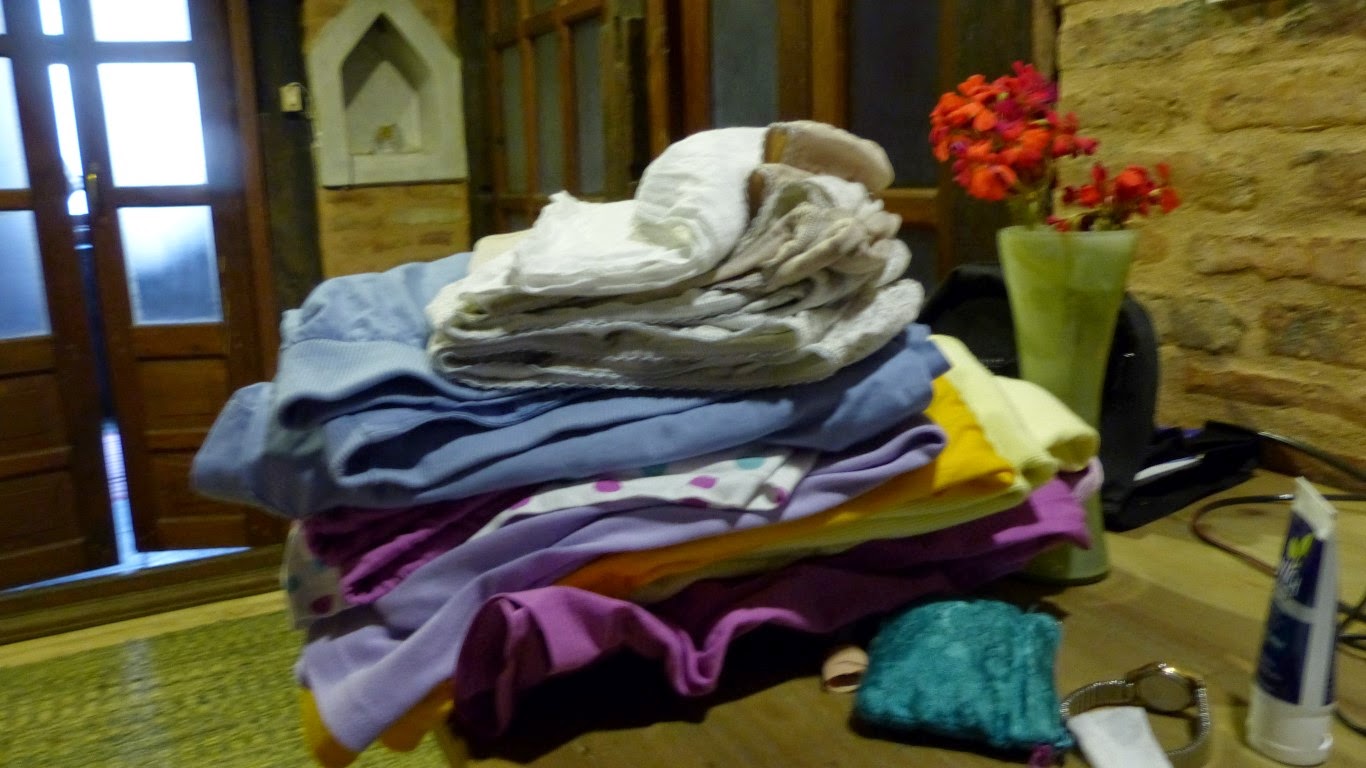 It was then time to get a taxi back. I opened negotiations and they started at 1000rs.I pointed out it had only cost 400rs to get there and eventually got them down to 500rs. Another hair raising ride later I was back at Durbar Square where all the shops which sell batteries were shut! On returning home I skyped Mum then everything happened at once....my washing arrived, beautifully clean and ironed, Anastasia arrived to talk about an adventure tomorrow and Sushil rang to arrange to meet in 15 minutes time! I hastily got ready and arranged to meet Anastasia tomorrow then headed out. while we had been talking the monsoon had got going and the rain was extremely heavy. I ended up paddling up to my ankles through flooding up to the top of Durbar Square. There I waited in the rain but Sushil was delayed by work and flooding so I had to take shelter in a temple. The cape Dad had lent me proved no match for the monsoon and I was completely soaked.

After many misses Sushil and I finally met and we waded through the flood - now up to my knees (and i don't like to think what was in it!) - to his car. I was completely dripping wet, through to my inner garments. we drove through the city to Lazimpat where we met his family and went into Nepali Chulo restaurant. His wife had kindly brought me a towel and in the car with the  heater going I had dried off a little. However, I was still wet when i got home 3 hours later!

Dinner was really lovely; a variety of Nepalese dishes accompanied by rakshi (local rice liquor - it's VERY strong) and Nepalese singing and dancing. Sushil's children were there and they loved the books I had bought them and chatted to me in English. It was so lovely to see Sushil again after so many years and it was a very happy evening. 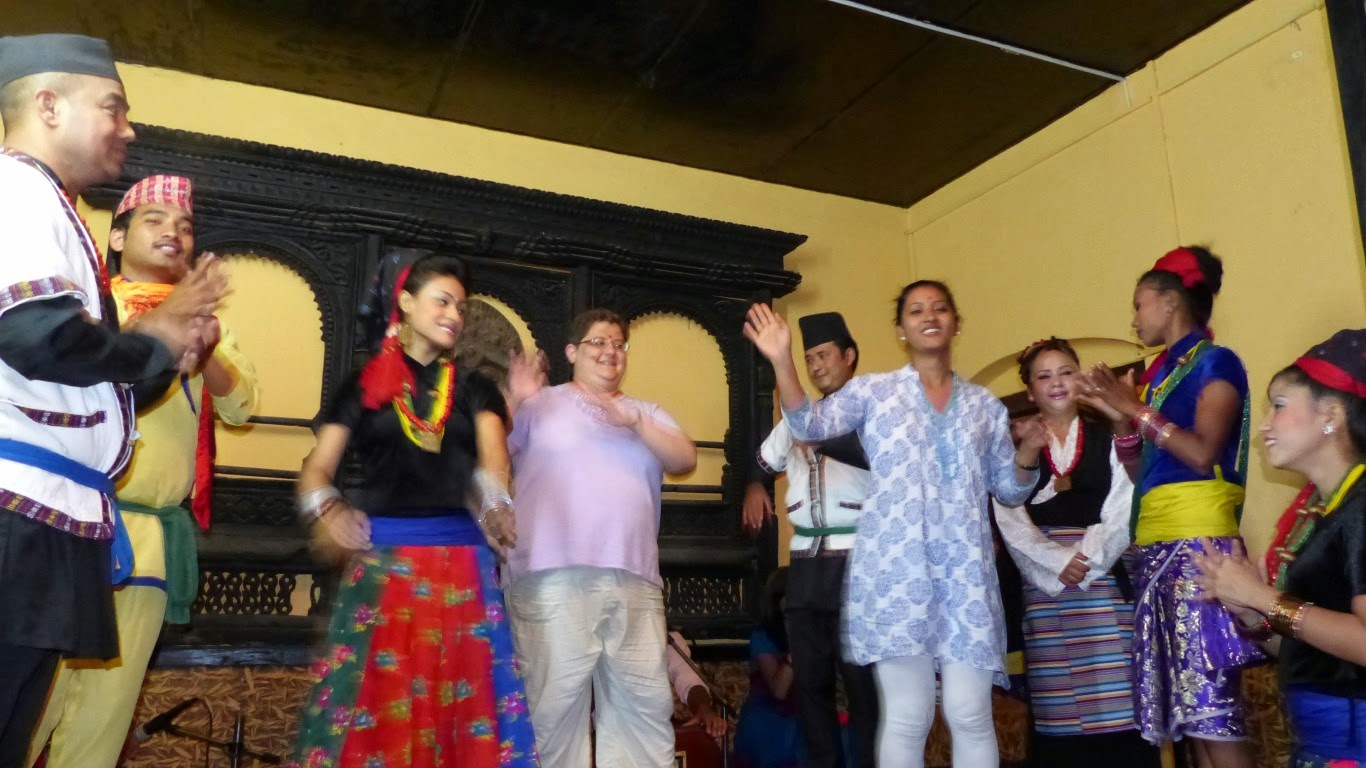 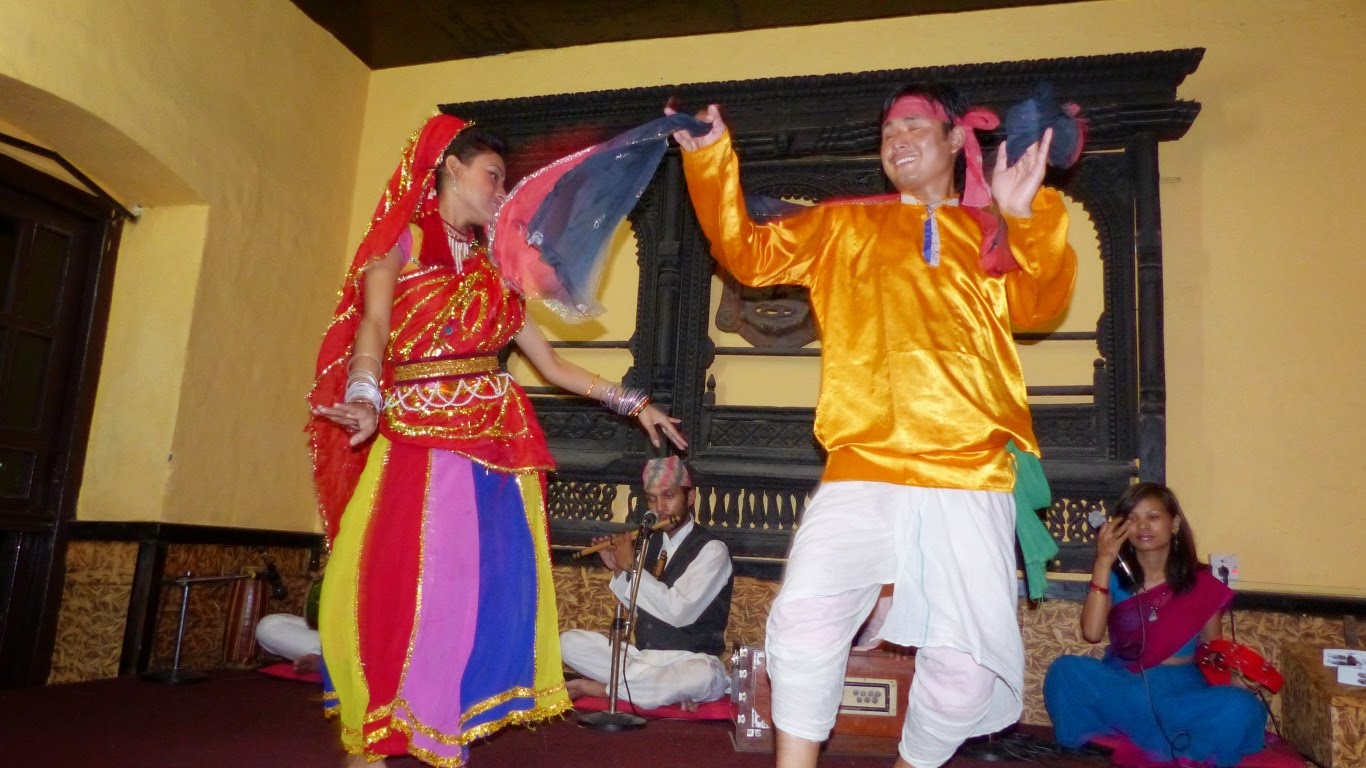 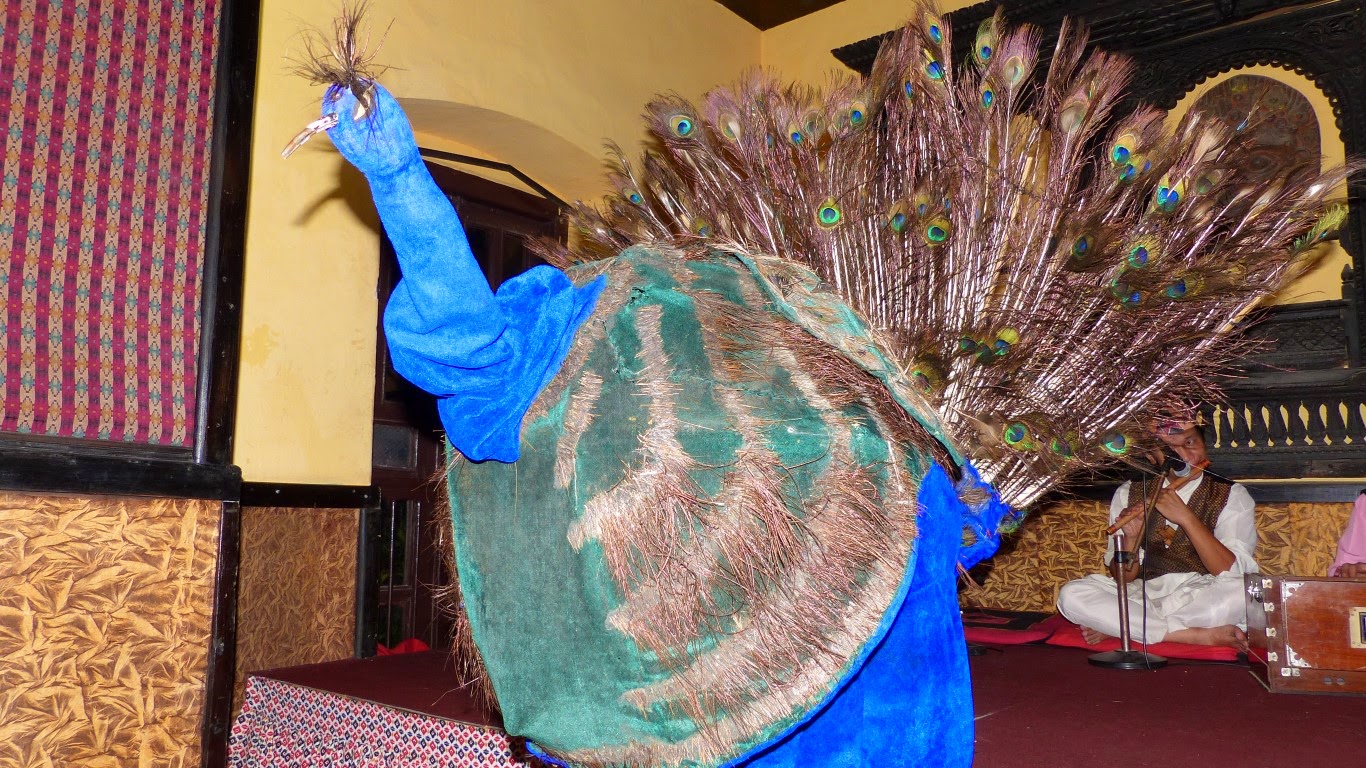 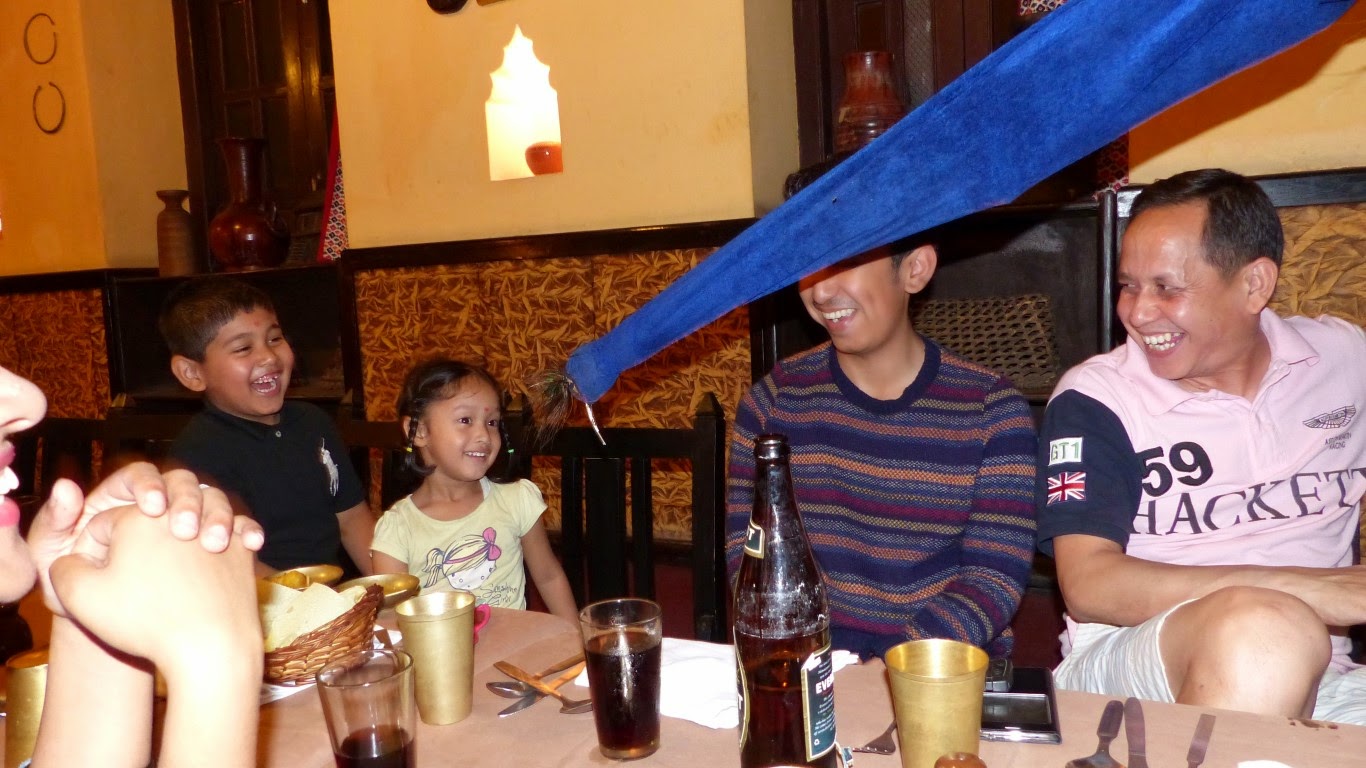 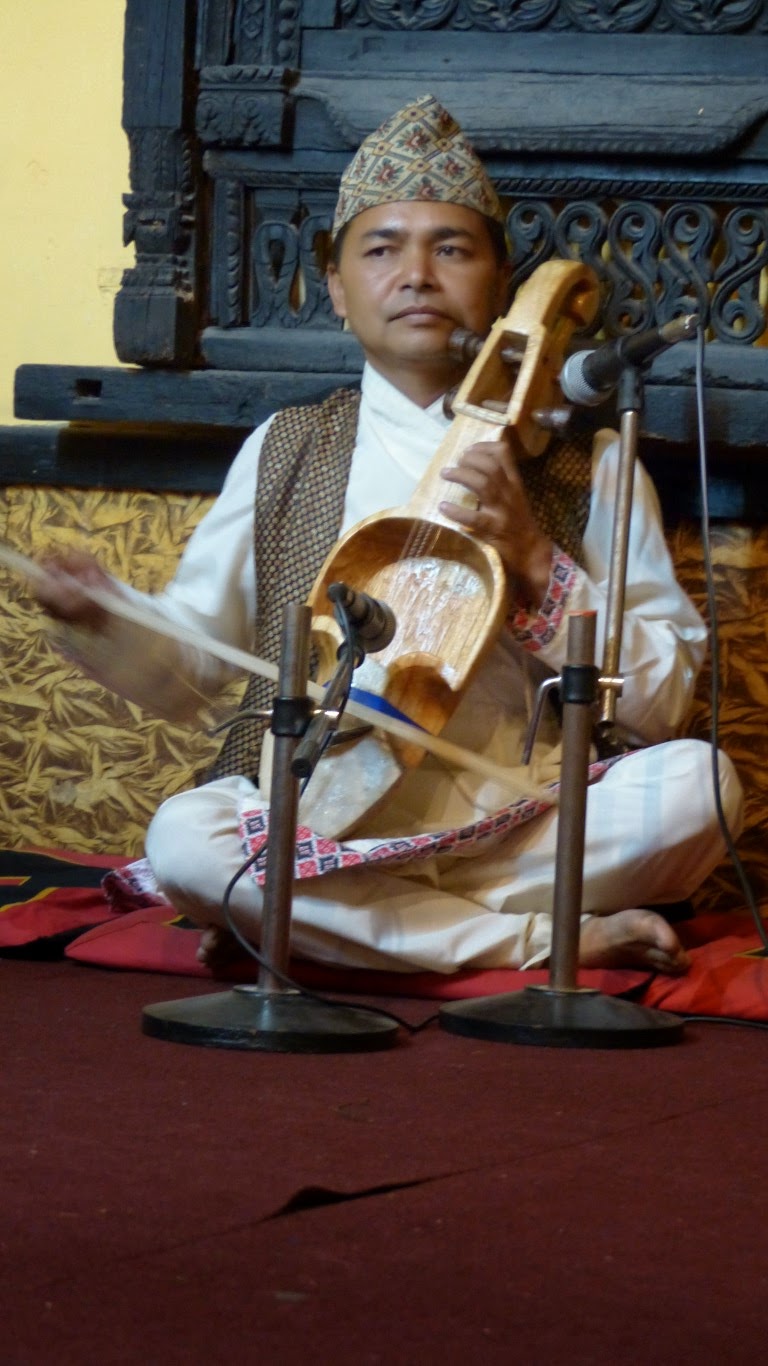 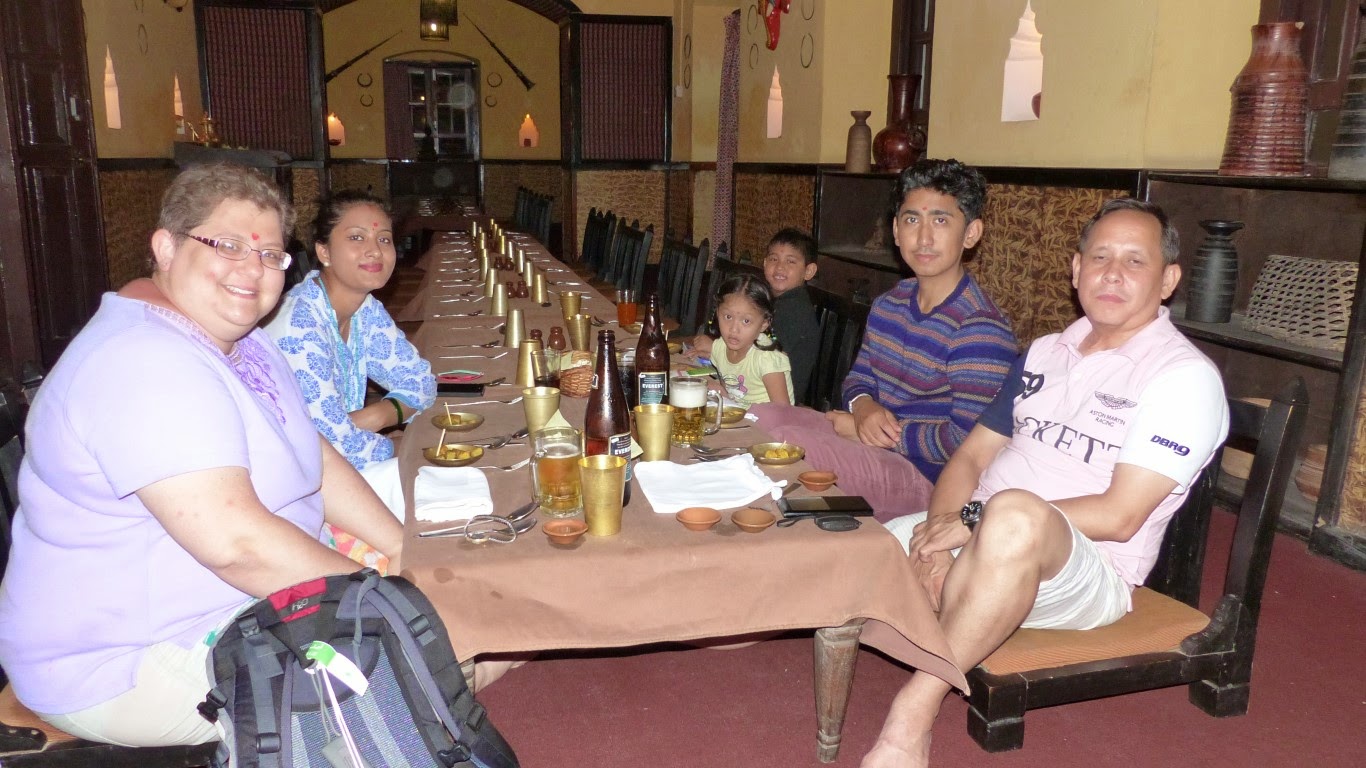 Sushil's driver dropped me back at Durbar Square where I squelched through the mud to the house. I was feeling a little woozy from the rakshi so got changed quickly and went to bed where I slept extremely well.
Posted by Namaste at 05:06